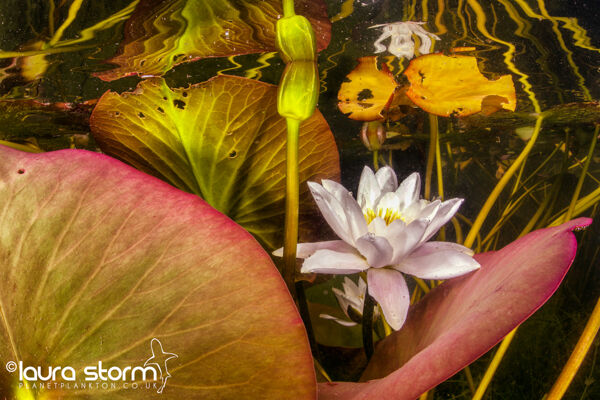 It’s waterlily season. There’s just enough depth to float over the stunning central arm of Bosherston’s famous protected lakes. Underwater, unopened lily buds are making their journey upward towards the sun. Others have already opened, fresh white blossom in unexpected places. From the surface, a carpet of lush green leaf pads guard this hidden world beneath.

It’s a rare privilege to be in the water photographing such a unique ecosystem. We’re working in close collaboration with the National Trust’s conservation team, based at the Stackpole Estate in Wales. Our window of opportunity to capture images of this sensitive environment is tight. In a few short weeks the show will be over. But right now, it’s curtain up!

The lily pads form a dense canopy – akin to that of trees in a rainforest. Thick stalks twist and turn, wrapping themselves around each other, creeping through gaps they find. There are snails everywhere and tiny schools of juvenile Roach and Sticklebacks dart about, surprised to see us in their sheltered territory. What is also surprising are the colours. The leaves and stalks are a completely different palette to the dark greens showing above. Yellows and other shades of green dominate but there are purples and pink and vivid splashes of russet reds and orange. The visibility is fantastic. Crystal clear, spring-fed aqua pure – an underwater photographer’s dream! 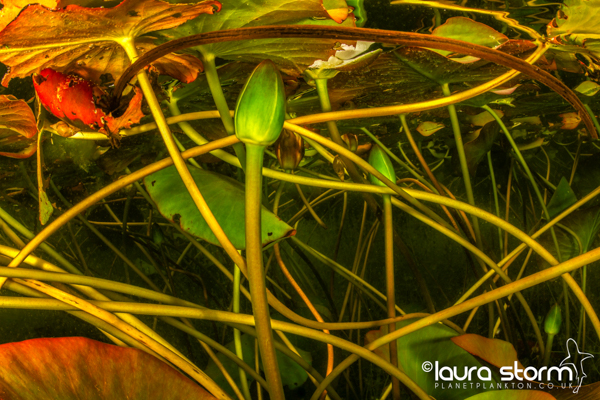 While the lilies prefer to hug the margins of their habitat, other aquatic rarities are firmly rooted everywhere else. Vast beds of stonewort compete for light and space. Here and there, depressions appear, dips hollowed out by sleepy pike that use the springy, plant-like algae as a day bed. They are so perfectly camouflaged that we almost miss seeing one. It’s huge! As you would hope a freshwater predator would be in such a blissful home. It’s a sign there’s plenty of food, that this is an ecosystem in balance. But like a torpedo, the pike fires itself off and out of sight before we can capture its portrait.

Photographing the scene is surprisingly challenging. We’ve modified our kit to minimize any risk of entanglement, so we’re a little less mobile without our long-bladed, specialist fins. Strange micro blobs periodically stick to our camera ports and we have to keep wiping them off. They’re alive! They are so tiny and impossible to identify. Thin bubble streams rise up from the benthic zone of the lake. Natural aeration. This is such an interesting place to be!

Setting up a rather basic day camp for our photographic and freedive kit has only been made possible with help from the National Trust rangers. A guided 4X4 off-road trip, across fields and mucky terrain has saved us from a logistical nightmare. We’ve been treated to a detailed recce of the lakes, aided by aerial maps that highlight the best place to access the ecosystem. Valuable insights imparted, we’re now appreciating the time spent preparing for this unusual project.

The water level is critical to the success of our venture. Though the winter months, the level rises in relation to seasonal rainfall but of course, there are no lilies on show. Once the summer arrives, water begins to seep away through deep fissures in the lakebed; the rate of evaporation increases and the weedy-looking stonewort continues to grow until it more or less breaks the surface. Timing of the flowering season is paramount. We have on average about a metre from the surface to move around in. In a week, it will be less again.

There’s also the light play to contend with. Above the water, it’s an ever-changing ballet of sun peeking out and clouds zooming in. Underwater, much lies in the shadows created by the expanse of floating lily pads. On the pancake-flat surface, the glare of reflected light is at times blindingly intense, making it impossible to view our LCD displays in the moment. We’re mixing up what we do, ambient light and strobe, pushing the ISO range and constantly tweaking f/stops, shutter speed and strobe arrangement. 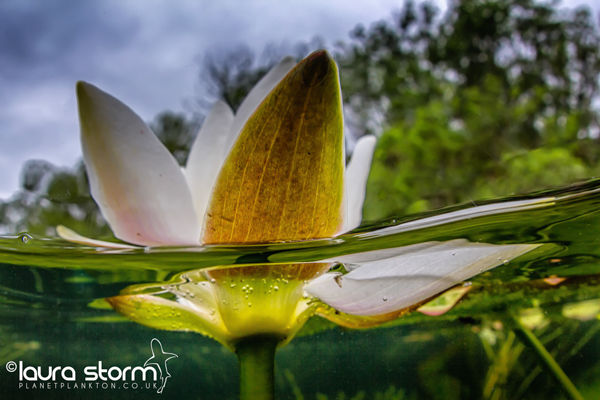 The lakes are in effect, flooded valleys. And whilst they interconnect, each one plays host to an individual food web determined by the water preferences of the animals and plants found there. Alkalinity, salinity (or lack of) and relatively low nutrients play a part in that. But also there are input streams and springs, a wide temperature range and in places, outflow - and therefore access to the ocean. This last aspect has an intriguing and magical element to it, but more about that later.

For a number of years, it’s been a personal dream to capture images of aquatic plants like these lilies. When we landed this opportunity, we spent a number of evenings storyboarding ideas. Not only to give ourselves a fighting chance to get things right but also to deliver fresh images that could be used by the Trust in their conservation efforts. Bringing this secret world to life helps to raise awareness about the importance of freshwater marl lakes and that was one of our goals.

Above the waterline, visitors are arriving from far and wide to see the star of the show. As they walk across the causeway and look out over the lakes, their first glimpse draws a universal gasp of appreciation. They’re witnessing the early flush of lilies in bloom. Fresh and full of promise, waterlilies symbolize rebirth and optimism, peace and purity. They’ve long been a source of aesthetic inspiration, valued by artists, poets and nature lovers. Time hasn’t diluted the allure. But the topside view is only half the story. Capturing this seldom seen visage helps to tell the rest.

Starting with a little flower power, the European white waterlily holds a few secrets. Its star-shaped innocence has unusual medicinal properties. The flower petals contain powerful alkaloid phytochemicals and the rooted rhizomes are known to have an anaphrodisiac effect when crushed and mixed with wine. Legend has it that this remedy was used hundreds of years ago by monks and nuns, to quell libido. Much more recently, scientists have pieced together data that suggests the oldest flower, dating back to the time when dinosaurs ruled the land, looked like a waterlily. This 140 million-year-old parent plant transformed our world into the ecologically diverse planet it is today. Their arrival had a dramatic effect on ecosystems, the climate and biodiversity. Including the evolution of pollinating insects, like the bees that still have a soft spot for waterlily pollen today. Once open, each lily flower lasts for between 3 and 5 days before it fades, sinks beneath the surface where it then develops into its fruity seedpod and the cycle of life can start over. 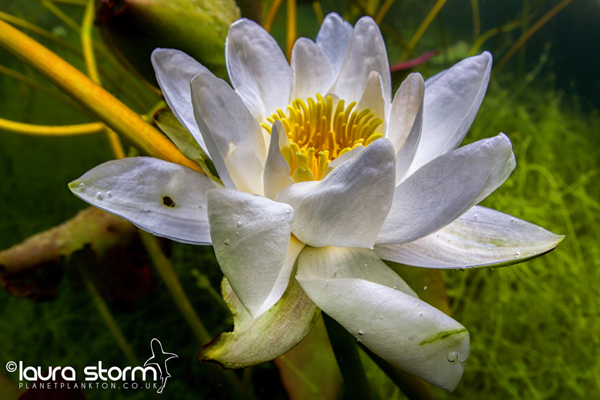 Whiter Shade of Pale
Capturing nature’s white colour spectrum is never easy. Underwater, it’s double the trouble. Highlights can easily blow out; pale shades bounce light off their surface into the immediate surrounding space. It sometimes creates an effect like a microscopic snowstorm or backscatter halo around the subject, even more so when strobe is introduced. Balancing the light was probably the trickiest issue we had to contend with. The tiniest kiss of sunlight filtering through the water was often enough to light a lily’s brilliant white petals.

Other insects and invertebrate life thrive around the lily pads. Water bugs and beetles, aquatic aphids, damselflies and dragonflies, algae and sponges all make their home in, on or underneath the broad leaves. Their spread provides shelter for small fish and acts as a weightless, buoyant hatchery for insect eggs, a floating hideaway, a chance for Jack pikes to avoid mum and dad’s cannibalistic nature.

Young leaves are typically purple or a muted red. As they move upwards through the water column to where they rest on the surface, they morph on top into a chlorophyll-rich green. Later, when they begin to age and wilt, they appear to change again, caramelised by the sun into the burnt oranges we first noticed. During the long winter months, the leaves die away completely and disappear from view. But life in other parts of this sunken refuge goes on.

With their roots and rhizomes tethered to the bottom of the lake, only the shoots and some stems are visible to us. We know there are eels lurking close by but they’re hidden, inaccessible in the tangle beneath. They are critically endangered. And they have an incredible, almost unbelievable adventure ahead.

European eels spend much of their adult life in the muddy recesses of our lakes and rivers. At around 10 yrs. old they arrive at a defining moment. Just before they reach sexual maturity they journey across the Atlantic to the Sargasso Sea. Close to Bermuda, there’s a particular spot they favour. It’s an ocean gyre with unique conditions that set it apart from the surrounding waters. It’s very warm and very salty. Eel nirvana. There, the adults spawn and die in their revolution of life and death. 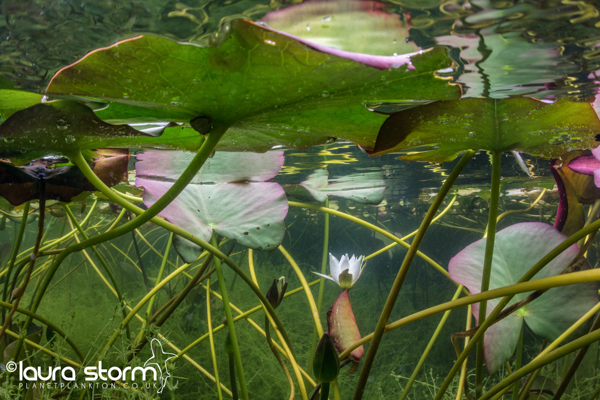 Canopy
Freshly spawned, the tiny, transparent elver offspring journey back. They ride the Gulf Stream ocean current thousands of kilometres, until they reach the western shores of Europe in the Spring. Wales and Bosherston’s protected lakes welcome them home. They wriggle their way into the murk beneath us, obscured from view by the fluffy mattress of stonewort and the chaos of tender waterlily shoots.

One of the limitations we encountered was shooting the scene using a single dedicated, big picture lens. I don’t mean to imply that you can’t indulge in a wide range of creative styles, for wide angle has many applications. More that we were hoping to include macro work in the mix. But we had determined early on that switching to close-up lenses in the field was going to be a recipe for disaster. There simply wasn’t enough time to dry everything off, let alone protect electronics from the multitude of environmental hazards; wind, buzzing insects, dog walkers, brambles, dust and sticky mud. To kick off with, I had rigged my camera with a 15mm fisheye (one of my favourites) and my partner in crime was using a Panasonic Lumix 7–14mm rectilinear lens on his. And so we rolled with those, embracing the challenge.

A few hours later, we were warming up from our long stint in 14°C. The time had flown, as happens when you’re immersed in something you love doing. We radio back to base that we’re done and dusted before lugging all our kit to the pick-up point.

We’re smitten with this underwater sanctuary. Our inaugural time in these special lakes has been a fascinating and in many ways, original experience. This phase of our project has been to highlight a particular, seldom seen perspective in the hope that it will generate a better understanding of freshwater habitats, their importance and why we should protect them. It’s evident that the extensive conservation work and careful management of the nature reserve is already paying off and it feels good to be able to contribute further to that in our small way.

Heartfelt thanks goes out to the amazing team at Bosherston, to the National Trust and to the lilies.